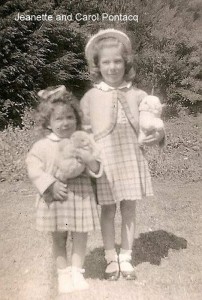 At the time, I could not answer the question of this charming seller in Tarbes. Embarrassed, I decided to find out.  Two years later, I found an entire family history of immigration from Béarn to California, new friends and relatives in France.

My searches were helped in great part by Pierre Xans (now deceased) of Pau and Christiane Bidot-Naude of Bayonne. At the time, Pierre Xans was the head of the Genealogical Society of Pau. Mr. Xans came to visit northern California and I was happy to host him at my house, showing him around the area, including the city of San Francisco. He was very helpful in figuring out my family tree, plus it was he that insisted that I meet the talented Christiane Bidot-Naude of Bayonne, the queen of searching for one’s roots in the southwest of France.. 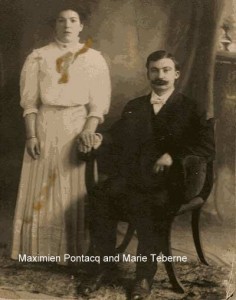 Maximien (Jean) Pontacq was married to Marie Teberne on the 12th of June, 1879 in Buzy, France. Max had been born in Escout on the 20th of August, 1852 into a poor farm worker family, while Marie had been born in Buzy on the 8th of July, 1855 into a more prosperous family of landowners.

Max, a farm hand, lived near the larger Teberne house and had fallen in love with the lady who would inherit that house with the fruit trees and farmlands in the village south of Pau. They met and fell in love.

Soon, it happened that the land became indebted and Max and Marie needed to make enough money to buy back the land. Their idea was to go to San Francisco, California to open several French laundries. The couple thus made their way from Buzy to Le Havre for a boat to New York. From there, they either took the new transcontinental railroad to California or took a boat that took them around the tip of South America to the Golden State. The Panama Canal was completed in 1914, a bit too late for their commute over the years before returning to France. Either way, the trips were monumental and difficult.  One has to be in awe of what they did several times in their commute from Buzy, a small village near Pau to the coast of California. Once in San Francisco, they quickly opened their first laundry near the port and present financial district. 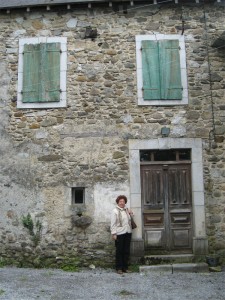 They made money. They then made a few trips back and forth between Buzy and San Francisco, to both keep up their businesses in California and keep up their rights to the land in Buzy. Their two children, Jeanne Marie Pontacq (born 10 August 1884) and Jean Vincent Pontacq (born 7 September 1881) first saw the light of day in Buzy.  The children then became part of the trips between Buzy and San Francisco. Max was a charming person and Marie had business in her blood.

In the end, having made sufficient funds for what they wanted, Max and Marie went back to France for good around 1907-8, leaving their grown kids in California. Marie died in 1929 in Buzy, while Max lived 10 years longer, dying on the 13th of May, 1939 on the property in Buzy.

Both are buried in the church graveyard (last tomb near the wall) in Buzy. Max had willed the property in Buzy to his daughter, Jeanne Marie, in California, as he was at that point totally ‘out of favor’ with his son, Jean V. Pontacq. Jeanne Marie sold the property.

It should be mentioned that Max was known as a fun, dynamic person of good intellect and heart.  He was also known affectionately as a kind and generous man in his late years, always carrying apples from his orchard for the kids of the village.

Just as Max and Marie Pontacq were preparing to leave San Francisco to return for good to Buzy, France, Baptiste Beuille and his ten children were arriving at Ellis Island in New York from Arbéost in the High Pyrenees. The date was February 23, 1907. Records show that although not all his kids arrived on that date, Elise Beuille (born August 24, 1988) was on the list of passengers. Baptiste was 63 when he arrived in America, with Elise about 18.

In France, Baptiste had been a goat herder and at 63 was not in his prime to work. But he had a number of sons and daughters to help him. At the time, San Francisco had a vibrant French community, already boasting a hospital supported by La Societe Francaise de Bienfaisance Mutuelle.

The story continues in California ….

The story restarts with Max and Marie’s 2 kids in California and all the Beuille kids. Jean Vincent Pontacq married Elise Beuille of Arbéost (Les Hautes Pyrénées), France, in San Francisco, just as or after his parents went back 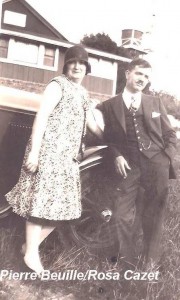 to France. These two sections of the extended family, although cordial, would be mostly divorced from each other on the subject of allegiance to and interest in the family in the southwest of France. Jeanne Marie kept in contact with her father and mother in Buzy, whereas her brother, Jean Vincent, turned his back to his family in France.

It is interesting to see that a Beuille son, second generation, married a Paul daughter, while Edouard Pontacq married Mildred Paul.  The Paul family was Irish/English/Scottish/Dutch, thus pure American.  The large and extended Pontacq/Beuille/Bouret/Paul families were very close over the years. 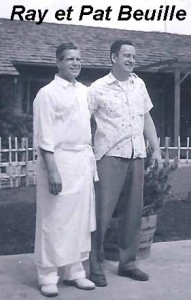 The Beuille clan came from a beautiful, narrow canyon in the High Pyrénées on the border of Béarn and les Hautes Pyrénées. with the villages of Ferrières and Arbéost.

The villages up there in la vallée de l’Ouzom were/are isolated and more than difficult in the winter. All 10 children of Baptiste Beuille, a widower, quickly left the valley and immigrated to California after the death of his wife, Anne Cazanave.

I, Jeanette Marie Pontacq, lived in that lovely; isolated valley for several weeks recently as a guest of my charming cousin, Mimi Tort-Poulou, a Cazanave, and can say that I understand why Baptiste left for California with his kids once his wife died. The isolated valley offered few possibilities to Baptiste’s extended family at that time, whereas California was a dream.

John Vincent Pontacq did several things during his lifetime (including opening a restaurant in Seattle {not successful} and looking for gold in Alaska, but the last and longest was to own a grocery store on 33rd and Irving Streets in San Francisco. He lost a finger in the machine he had bought to cut bologna. His wife, sad and difficult for everyone, died early in 1947, while her son, George, became a serious drug addict, unhappy, dying in 1968 from an drug overdose in a whore house on Clipper Street/San Francisco. 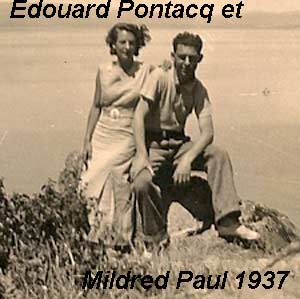 The marriage of Jean Vincent Pontacq and Elise Beuille in San Francisco was not a happy one. Elise was unhappy from the start, even paranoid, although her husband was not an easy man to live with. She produced two children:  Edward Joseph Pontacq (1910) and George M. Pontacq (1909), two opposites. While Elise became paranoid, Jean became more licentious and erratic. Elise hit the young Edouard with a large piece of wood, making him deaf in one ear for the rest of his life. It was not a happy family.

Jean V died in 1963 in the family duplex on 33rd Street when a mistress stole his beloved Cadillac and shouted insults in front of the apartment on 33rd street when he tried to break up with her, pushed to do so by Mildred and Edward Pontacq.  He died of a heart attack from embarrassment and chagrin.

Edward Pontacq followed the straight and narrow, as he saw both his father and brother take what he considered the wrong roads in life.  Happily, he found and married Mildred Paul (born 1915). The Paul family was a joy to Edward in as much as it was much more open and loving. He especially loved Mildred’s mom, Mildred Donahue Paul (Nana to the family) and almost every day during his work life with Ma Bell, went to her house on Clipper Street for coffee and conversation.

Edward mirrored the life of hard-scrabble peasants in France.  He never was able to spend money to mirror what he had in California. Rather, his life mirrored isolated, poor peasants in the mountains of the Pyrenees.

While he was alive, his own home in the Sunset district of San Francisco was badly furnished because he never wanted to spend money on such things as ‘comfort.’ Or ‘style.’ When he died at the age of 66 of a heart attack, his wife was sad, but soon changed the furnishings of the house to more reflect the present. 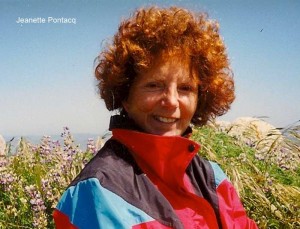 Edward Pontacq and Mildred Pontacq had two daughters:  Carolyn (1940) and Jeanette (1943).  Edward was always disappointed in two big things: 1) never having a son, 2) never being able to go to University due to the Depression.  But he was a good father, always supportive of his kids even when he disagreed with them.  His wife, Mildred, from the lovely Paul family, was unhappy to have to deal with the crazy Beuille/Pontacq inlaws, mostly alone as Edward turned his back to them.

Carolyn Pontacq married an American-Italian she met in a small, local college: James Lavaroni.  The family owned lots of property in key, rich areas around the San Francisco Bay.  Her sister, Jeanette, was at UC-Berkeley during the Free Speech movement and the riots against the Vietnam War.  Two sisters who never understood each other.

The French side of the family, looking back to dear Max and Marie and Baptiste Beuille, is being lost. Few now know their history and where they came from. This is sad, but a part of the making of California. 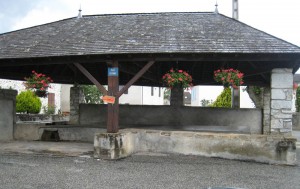